Trinity House Gets a New Royal Charter from James I

A new Charter of Incorporation is issued by James I, making the first proper mention of Elder Brethren and Younger Brethren.

At the start of the 17th century the duties of Trinity House had gradually accumulated, and now included survey duties afloat, inspection of naval stores, examining and licensing pilots, placing and maintaining beacons and buoys and administering the Ballastage Office, as well as the considerable ongoing charitable works. This ever-expanding range was formally recognised when the 1604 charter of King James I increased the small band of governing officials from 13 to 31 by the addition of 18 deputised Elder Brethren. The remaining members of the Corporation then became known as Younger Brethren.

An invasion by Napoleon being feared, the Elder Brethren undertook the defence of the Thames.

The Royal Trinity House Volunteer Artillery was formed, a body of 1,200 men was enrolled, the officers being Colonel William Pitt (Master), Lt. Colonel Joseph Cotton (Deputy Master), the Elder Brethren were Captains, and some of the Younger Brethren were Lieutenants. A flotilla of frigates was moored in the Lower Hope: Daedalus, Unite, Vestal, Modeste, Retribution, Quebec, Iris, Solebay, Heroine, Resource and Royal Charlotte.

The flotilla was removed in October 1805 when the danger was considered passed.

Trinity House defends the Thames in 1803

“Captain James Salmon of Poplar, knowne to Sir Richard Haddock & Captain Mudd to be a frequenter of the Church upon his Request was admitted a Younger Brother & took the usual oath. John Coppin & John Keeble – made their Request to be admitted Brothers, and having being interrogated Whether they frequent the Church & have received the Sacrament according to the Church of England to which giving no positive reply they were deferred till they brought Certificates of Receiving the Sacramant & frequenting the Church.”

“The Master (Lord Dartmouth) takes notice that Sir John Clayton had been with him and said that this Corporation’s business was to promote the interests of their poor & he would give £50 a year to their poor for approving his lights. It was answered that in the last Report in answer to Sir Edward Villiers case It is represented to this effect that it is not consisted with the interest of the poor, nor of Navigation to admit of such temptacons when this Board are not satisfied in the usefullness of those lights”

“The Master letting the Board know the Scandal this house lay under in their having admitted heretofore Younger Brothers being Dissenters from ye Church & ill affected to ye Government, it was debated how the evill should be prevented hereafter, and Resolved, that no late or any other Younger Brother to be made hereafter being a Seaman and expecting a Branch from this House shall be admitted into this Corporation, without bringing a certificate from ye Minister & Church Wardens of ye Parish to which he belongs of his conformity to ye Church of England as by Law established & of his frequenting the same.”

The ‘Scandal’ would appear to be fallout from the enormous changes brought about by the Civil War, Oliver Cromwell’s Commonwealth and the subsequent Restoration.

The ‘branch’ referred to is the certificate issued to Younger Brethren by Trinity House. 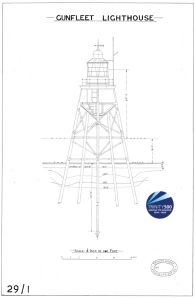 “Mr. Baker (buoy keeper at Harwich) to attend on 7 July to go down with the Gunfleet Beacon, and in the meantime to lay a buoy near the place where the Beacon is to be set, and that it may stand dry at Low Water if possible. He is also to clean the buoys on his passage up. The Board is informed that the buoys at the Spitts lie too far to the westwards, and he is to observe them, and if he finds them so, to put them in a proper place.”

A buoy was first laid at the Gunfleet sand in the northern Thames Estuary in 1629. A lighthouse (pictured here) was established to mark the position in 1850, until it was discontinued in 1920. Today the area is marked with a number of buoys.

“Petition of Thomas Coram read, proposing a new settlement in some uninhabited part of North America, and praying a certificate from the Corporation… which was ordered to be given under the seal of the Corporation, Thomas Coram being a Younger Brother.”

Captain Thomas Coram (c.1668 – 29 March 1751) was a philanthropist who created the London Foundling Hospital to look after unwanted children in Lamb’s Conduit Fields, Bloomsbury. It is said to be the world’s first incorporated charity. In 1717, he unsuccessfully promoted the idea of founding a colony called Georgia in what is today Maine as a philanthropic venture.

Sadly, the nature of the certificate granted to Captain Coram is not known, and would appear to be a now-defunct function of the Corporation.

“With the two Sir Williams [Penn and Batten] to the Trinity House; and there in their society had the business debated of Sir N Crisp‘s sasse [a sluice or floodgate] at Deptford. After dinner I was sworn a Younger Brother; Sir W Rider being Deputy Master for my Lord of Sandwich; and after I was sworn, all the Elder Brothers shake me by the hand; it is their custom it seems.”