Two fast pilot launches operated from Ryde Pier during 1970 to ship and land pilots at the Nab Pilot Station and to ferry outward pilots to Gosport on the mainland to facilitate their return to Southampton. The shipping using the Nab Station required pilots for the ports of Southampton, Portsmouth and other ports in the Solent.

During the construction of the shore station, the former cruising cutter Bembridge was used for accommodation and communications and then sold out of service to the charity Dial House, to be used as a training ship for under-privileged youngsters in the care of local authorities.

The V.H.F. R/T communication system for the new Ryde Pier Pilot Station was new to the Trinity House Pilotage Service.
With the introduction of the new scheme, considerable savings in manhours were made. The pilot station and launch system was more economical than maintaining a cruising cutter at the Nab Station. 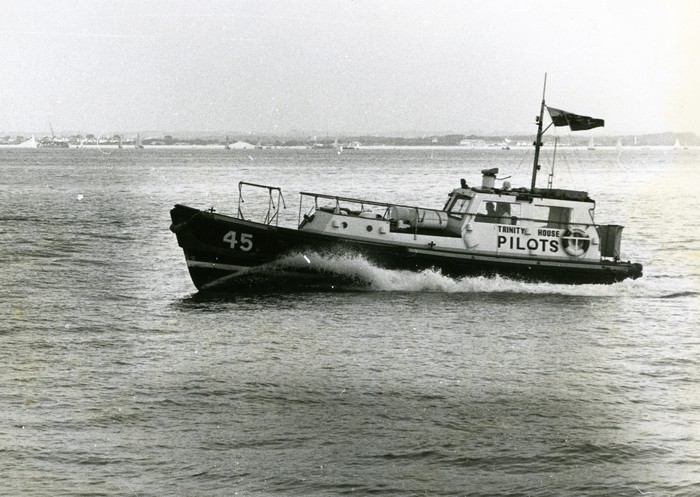 “Mr. Jeffrey Curtis, one of our Pilots, having lately conducted His Majesty’s sloop, the Hawk, from Galleons Reach to the Orkney Islands, thence on a cruise to Iceland and back to the Nore, and there being no established rates for the whole of that service, The Hon. The Comptroller of the Navy was pleased to consult this Board and to desire their opinion thereon which was that Eighteen pounds is a reasonable rate for conducting the said sloop Out and Nine pounds Home: The trip to be rated at seventy days and the excess of time according to the usage of the Navy.

On his proposing a farther case about the pilotage of a sloop from Heligolandup the River Yezer and down the said River to the sea: the Board were of opinion that it will be reasonable to allow the Pilot over and above the Established rates five pounds for his Extra Pilotage of the Sloop up the said River and five pounds more for bringing her down to the sea.”

The Elder Brethren Are Out of the Office

“No Court, because all the Elder Brethren were present, according to custom, at a launch of a great ship of the King’s.”

The ship in question was HMS Royal Katherine. Samuel Pepys remarked of the launch:

“At Woolwich; I there up to the King and Duke, and they liked the plate well. Here I staid above with them while the ship was launched, which was done with great success, and the King did very much like the ship, saying, she had the best bow that ever he saw.”

A Pilotage Complaint is Brought Before Trinity House

“Captain Edward Carteret of the Italian Merchant lately arrived from the Streights attended and complained that on 8th. February last as he was outward bound on his last voyage outward from London to the Streights, Francis Lilly being then his Pilot down the South Channel towards the Downs, he the said Francis Lilly ran the said ship aground on the Last at Noon-day, near High Water, the Weather being clear, Light winds Westerly and the buoys in sight. Captain Carteret said that when the the ship first touched the ground, He cry’d Hard a Starboard, which if Lilly had suffered to be done, the Ship would have got Clear, But he (Lilly) Crying Hard a Port at the same time, the man at the Helm Observed him, which laid the ship across the said Last Sand, where she almost dry’d at Low Water, The ship being Aground, Lilly insisted that she was on the Spell, which the Captain not being satisfied of, took his boat, and on sounding himself, found that she was on the Last. The Captain said further that the Loyal Jane, Sabine Chandler, Commander, then bound for the Downs was in company with his ship (the Italian Merchant) and a head of her in the arrows, and went clear.

Ordered, that the Rt. Hon. the Master be acquainted with this complaint before any further proceedings be taken thereon.”

“The Master ordered a court be held on the 13th. inst. to hear the complaint.”

“Agent at Yarmouth reporting that great damage has been done to our lighthouses at Castor [Caister or Caistor] by the late storm, and that he had done what was immediately necessary for keeping in the lights, and asked for further directions. Ordered, to repair the lighthouses forthwith in such a manner as he shall judge necessary, with due regard to good husbandry and to the safety of navigation.

Letter from a master of a vessel forced into Fowey by bad weather, that he found great difficulty in entering the harbour for want of the mark of St. Saviour’s church lately blown down, and recommending the repair of it, to this Corporation. It was not thought incumbent upon this Corporation to repair the same, and as we receive no Duties on that account we cannot layout the Poors money thereon.”

The Trinity Yacht departs Greenwich for the Nore to join the Royal Squadron bound for Scotland, awaiting the arrival of the Royal George from Greenwich where King George IV had embarked. So began the privilege of Royal escort that became the tradition, whenever the monarch went afloat in English or Welsh waters, of the Elder Brethren preceding the Royal Yacht in pilotage waters.

The twentieth century kept the Trinity House flagships very busy: in 1969, the Corporation was paraded in full public view, as THV Patricia (1938-82) would attend HM The Queen on no less than three high profile occasions: the review of the NATO Naval Force’s 20th Anniversary, the review of the Western Fleet and the departure from the Humber of Her Majesty and the Duke of Edinburgh for the royal visit to Norway.

The Corporation and its flagship would discharge this same duty again in 1977, leading as Royal Escort for the Jubilee Fleet Review. Later occasions would include the Queen Victoria’s Golden and Diamond Jubilee Reviews, the Sea Service’s Thames Water Pageant in 1919, marking the end of the First World War, and the Royal Navy review in the Coronation Year.

HRH Princess Royal took pride of place when Trinity House Motor Boat No.1 led the vanguard of the Diamond Jubilee procession upon the Thames, as the Corporation continued its long-standing engagement with the nation’s most famous waterway; the Corporation would shortly after escort the royal barge Gloriana as she carried the Olympic Torch downriver from Hampton Court to Tower Bridge.

Trinity House is Officially Constituted as a General Lighthouse Authority

The Merchant Shipping Act of 1854 constituted Trinity House the General Lighthouse Authority for England and Wales and the Islands of Jersey, Guernsey, Alderney and Sark, and the adjacent Seas and Islands, and in Heligoland and Gibraltar.

Although the act of 1836 arguably sowed the early seeds of the modern lighthouse service, it was the Merchant Shipping Acts of 1854 that officially constituted Trinity House as the General Lighthouse Authority for England, Wales, the Channel Islands and the adjacent seas and islands, and Heligoland and Gibraltar. The act opened an account with the Paymaster General to establish the new Mercantile Marine Fund as the repository for Light Dues, although this early pool was simply a catch-all fund for all manner of maritime activities: Local Marine Boards, Shipping Offices, Surveyors, Receivers of Wreck, and so on.

The Merchant Shipping Act of 1898 replaced the indiscriminate Mercantile Marine Fund with the General Lighthouse Fund, an account for Light Dues overseen by Government for the dedicated purpose of ensuring the provision of an aids to navigation service.

The Elder Brethren are empowered to search for gunpowder aboard ships

The rescue season is now in full swing, and the Pilot Vessel Service has contributed in its usual manner. The best day’s bag was that of Mr. J S Brown, acting as Mate of Kihna who on the 2nd August set out in one of Kihna‘s boats to rescue the crew of a capsized sailing dinghy in Dover Harbour. A second dinghy capsized after Kihna‘s boat was got away, and both crews were duly rescued.

In July the Pilot Vessel Pelorus on station at Dungeness took alongside the yacht Salome which was leaking. The sole crew of this boat was an 80 year old Doctor, who refused to come on board. After Salome had been alongside for an hour and a half she was taken in tow by the Dungeness lifeboat.

On the 25th July the Vigia, which was in charge of her 2nd Mate Mr. L. Ablett, took in tow near Platters buoy the yacht Wayward Wind. The yacht was disabled with a broken rudder and choked pumps. The Wayward Wind with her crew of three was taken safely into Harwich.”

“To The Honorable Comishiners” – Ship’s Master in distress

The following letter was received by the Corporation from the Master of the schooner Farmer, who complains about having been put in Beaumaris Gaol (a now-disused jail located in Anglesey, Wales) for not taking a pilot:

To the honorable Comishiners of the Trinety House Bord Capt. Teer now Lying in the body of the gaiol of Beumoras takes this opertunity by leting your Honorable Comishiners know that i am confined for the cause of not taking a pilot when in safty inside of the Bare in safty the water man Received the ancrage Mony £0. 3s. tooke my Name then Come Back and Served awarant on Mee and Draged me to the Magstrate and he Comited me to the gaiol for the fine £50 pounds that is my fine or three Months Impresernt the vesel is heire for the want of a captan and the said that there was Several vesels had went away and not paid them and the would make a patman of me for all the rest

The Coronation review of George V at Spithead. Trinity House flagship THV Irene leads the reviewing squadron; it would be her last major public event.

As part of its 500th anniversary celebrations, the Corporation of Trinity House is offering the chance to win a copy of the new Trinity House photography book Light Through A Lens and a Trinity House-themed print by renowned illustrator Peter Kent.

We’ll post more about the book on this blog closer to its publication on 11 September 2014. In the meantime, you can read about it on the Bloomsbury website.