Trinity House falls victim to the most severe of the air attacks on London.

When incendiary bombs landed on the wooden beams of the house, fire fighters were able put out the first fire caused by the bombs, but the shortage of water prevented their efforts to extinguish subsequent fires. On the morning of 31 December 1940 the staff found the whole of the Wyatt building and the offices at the back with their walls more or less intact, but the interiors completely gutted; apart from the separate East Wing, the only surviving portion of the building was the basement wine cellar. Many archives, rarities, fine models, hangings and paintings were destroyed, save for the paintings that had been at Bayham Abbey, and some archives and books that had gone to the countryside. 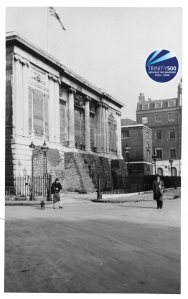